Doha, Qatar: The theme at the luxury W hotel in central Doha is beer. Budweiser beer. The walls are festooned with Budweiser labels. “Budweiser” is painted in enormous script along the check-in desk.

There’s a “Budweiser Player of the Match” corner, where armchair soccer stars can take selfies while hoisting a fake trophy against a Budweiser background. Bathed in red and white, the place has the feel of a giant beer can. 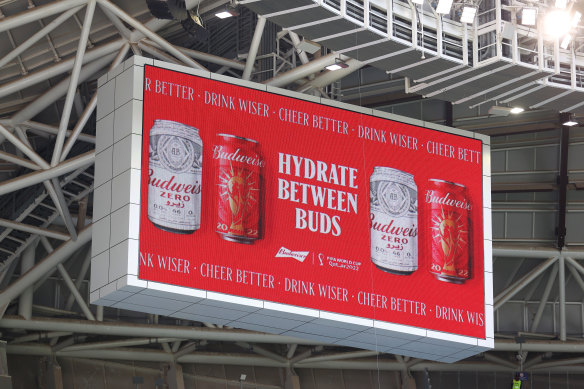 A big brand play: Budweiser advertisement during the FIFA World Cup in Qatar.Credit:Getty

Budweiser, which has been the official beer sponsor of the World Cup for the past 36 years, remade the hotel into what it called “a home away from home experience” in anticipation of the 2022 tournament.

That was before the moment, two days before the opening match, when Qatar’s government threw Budweiser’s carefully crafted (and quite expensive) beer-selling plans into disarray by suddenly forbidding the sale of alcohol in or around the tournament stadiums during the event.

The dismaying nature of the situation — the abrupt contravention of a plan years in the making, the 11th-hour dismantling of the elaborate Budweiser tents at the matches, the financial and related consequences for a longtime tournament sponsor, the public nature of it all — was aptly articulated at the time by Budweiser itself.

“Well, this is awkward,” the company wrote in a tweet — which it then promptly deleted, both illustrating and compounding its point. 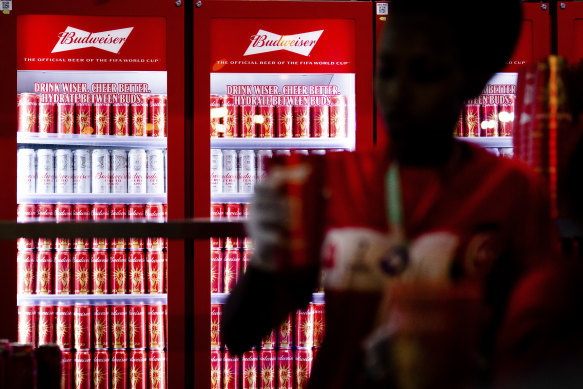 But, like the ghostly tweet, preserved forever in screenshots marked with “lol”s, Budweiser remains a presence at the World Cup, albeit in a watered-down way.

While the stadiums have been scrubbed of regular beer, they are awash in stacks of alcohol-free Budweiser Zero. Ads for the drink play on a loop on stadium screens, and refrigerators full of it sit within arm’s reach at concession stands, right next to the Coca-Cola.

But given the average fan’s attitude toward the usefulness of nonalcoholic beer as a sports-experience enhancer (“Why?” asked a fan at Lusail Stadium on a recent night, when asked if he had tried one yet), the available quantities would seem to reflect wishful thinking as much as responsible drinking. 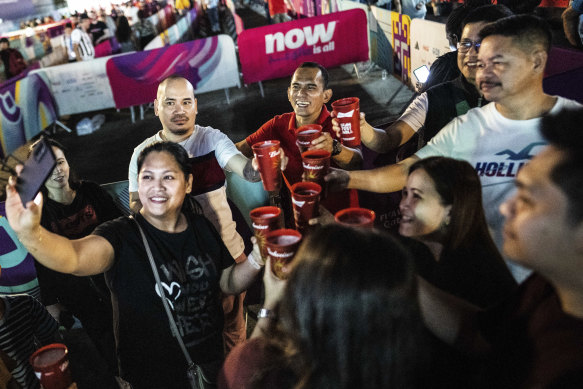 Soccer fans from the Philippines take a selfie after buying Budweiser beer at a fan zone during the World Cup in Doha, Qatar on December. Credit:Erin Schaff/The New York Times

At Lusail, the signs next to the Budweiser Zero duly noted that “Budweiser is proud to serve its products in compliance with the local rules and regulations.”

“Proud” is one way of putting it.

“I’m just glad it wasn’t us,” said a representative for another FIFA sponsor, who spoke on condition that neither she nor her company be identified, saying that she did not want to publicly criticise the Qatari government. “Qatari regulations are very strict and top-down, and it’s hard when you feel that the regulations can change so abruptly.”

Ricardo Fort, a sponsorship marketing expert who is the former ​​head of global sponsorships at Visa and Coca-Cola and who now runs his own consulting firm, said that what happened was “weird and embarrassing” — for Qatar, not Budweiser.

“I think it’s unprecedented,” Fort said in an interview. “I’ve been involved with the FIFA World Cup for several editions, and I’ve never seen anything like it.” 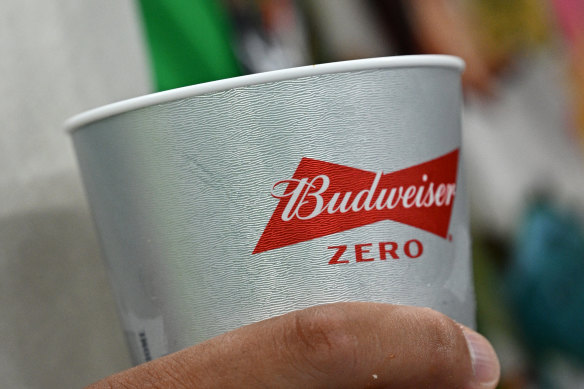 All the alcohol content of water: A close up of Budweiser cup at the FIFA World Cup Qatar.Credit:Getty

Among other factors, he said, the ruling came after Budweiser had gone through the logistical hassle and considerable expense of transporting its beer to Qatar, storing it and assembling the sales infrastructure required to sell it.

He estimated that Budweiser had spent some $US5 million ($7.36 million) on operations in Qatar over the past couple of years. “This is money that they lost,” he said. “There’s nothing you can do to get that back.” The company declined to confirm the figure, saying it does not disclose those numbers.

On November 19, the day after deleting its earlier tweet, Budweiser hit upon a plan to turn unsold beer into lemonade by tweeting a photograph of a bunch of cases of beer in a warehouse in an indeterminate location. 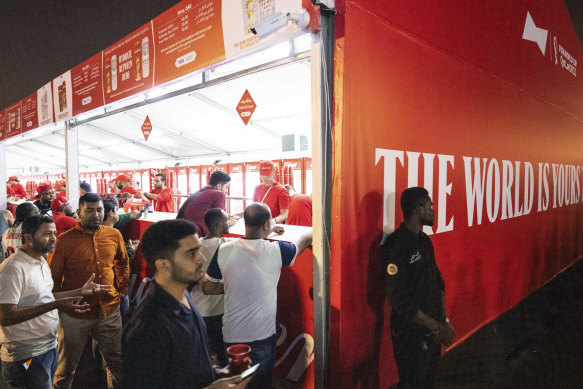 Soccer fans from the Philippines take a selfie after buying Budweiser beer at a fan zone during the World Cup in Doha.Credit:Erin Schaff/The New York Times

“New Day, New Tweet,” it said. “Winning Country gets the Buds. Who will get them?”

Later, the brewer announced that the winning nation would also receive “a celebration on us” and unveiled a cunning new slogan that can be seen inside the stadiums: “Bring Home the Bud.”

Actual beer sales at the tournament were just a tiny portion of what Budweiser expected to get out of its sponsorship deal, which includes lavish advertising; entertainment in Doha and fan festivals; and promotions at pubs, restaurants and retail outlets in some 70 countries. And Qatar is not a beer-free zone: Fans can drink it at set times in government-approved “fan zones” away from the game and in hotel bars, and select visitors have been granted permits to buy it at a single, isolated retail location.

Perhaps not wanting to offend the Qatari government or annoy FIFA — Budweiser’s reported $75 million sponsorship contract is up for renewal — AB InBev, Budweiser’s parent company, declined to discuss what had happened or answer any questions about the last-minute alcohol ban.

Instead, it released a statement extolling the virtues of drinking beer that contains no, or very little, alcohol, a message it had already been promoting with its “Drink Wiser, Cheer Better” advertising campaign. (Sample advice: Drink water or nonalcoholic beer between alcoholic drinks.)

“Budweiser Zero is a key part of our planned activations during the FIFA World Cup in the host country and around the world,” the statement said.

Consuming less alcohol is a good thing, obviously. How are visitors to the World Cup enjoying Budweiser Zero?

Lee O’Hare, 27, of Ireland, said he supported the notion of alcohol-free beer in general, just not for himself. “I got one at the opening ceremony for the love of the game,” he said, “but it just tasted like a watered-down version of a beer.”

David Allen, 51, who was visiting from Australia, said that he, too, tried a Bud Zero — mostly because it was there. “I couldn’t drink more than one,” he said.

His friend Ben Weeks, 48, said that, sadly, alcohol-free beer was not his idea of a good time on a hot day.

“I find water more refreshing,” he said, “and it gives me the same alcohol content.”

Meanwhile, dark theories abounded as to why the Qataris had waited so long to pull the plug on beer in stadiums. Fort, the sports marketing expert, said he thought Qatar’s decision was a result of inattention, not premeditation. But many fans were convinced the beer’s removal had been the idea all along.

“I think the Qatari government planned the entire time not to allow beer sales in the stadium, but they didn’t want to say anything because they were afraid people wouldn’t come,” said Marty Brazeau, a 36-year-old teacher from the Seattle area, who had come to the W Hotel in search of something to drink. “I’m not sure I would have come.”

As for Budweiser, Brazeau said, he felt bad about what had happened, but only to a point. “I do believe in the fulfillment of contractual obligations,” he said, “though it’s hard to feel sorry for a company as big as InBev.”

This article originally appeared in The New York Times.