President Donald Trump shared a tweet on Sunday that criticized “Democrat cities” and called for them to be left to “rot.”

Originally posted by Brandon Straka, the tweet was a commentary on footage of protesters in New York City yelling at drivers. Straka, who describes himself as a “former liberal and former Democratic party supporter who has very publicly walked away from the political left,” accused Democrats of activating a mental illness that had ruined America’s metropolises. 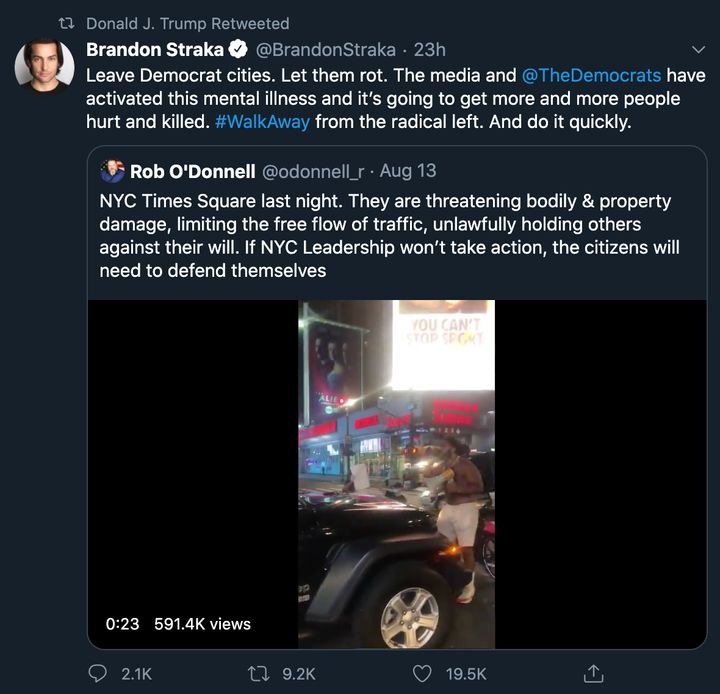 In 2018, Straka renounced liberalism in a viral Facebook video that described Democrats as “an ambitious, misinformed and dogmatic mob.” That same year, he founded the #WalkAway Campaign, a self-described grassroots operation that encourages people to abandon the Democratic Party. Straka also achieved notoriety in June for his removal from American Airlines Flight 1263, from New York City to Dallas, after declining to wear a face mask.

Straka’s rhetoric bears similarities to a recent rant by Fox News host Tucker Carlson, who argued that America’s cities have been destroyed by liberal elites who need to have their passports seized before they try to flee the country.