WASHINGTON — Facing questions about the yawning gap of actions his administration took against the coronavirus pandemic in February, President Donald Trump’s campaign is pointing to a list of accomplishments that serves to highlight that absence even further.

Trump for months has cited his Jan. 31 announcement of travel restrictions against foreigners coming in from China as proof of his “strong” actions to stop the pandemic. Pressed on Monday for what he did between then and March, when he finally declared a national emergency, Trump claimed: “A lot.”

His campaign soon afterward offered 20 items from February, ostensibly to back up his claim. “Anyone asking what @realDonaldTrump did to combat Coronavirus in February, here is a comprehensive list,” deputy communications director Erin Perrine wrote on Twitter.

But items on the list ― which are taken from a campaign webpage boasting of his “decisive actions” to fight the pandemic — attributed to Trump personally are mainly his statements about the virus and his self-proclaimed success in containing it.

His two sentences in his Feb. 4 State of the Union address, in which he claimed he would take “all necessary steps” to protect Americans, is listed as an accomplishment. As is a Feb. 7 gaggle with reporters: “President Trump told reporters that the CDC is working with China on the coronavirus.” On Feb. 26, Trump’s having “updated the press on his administration’s efforts” is also listed as an accomplishment. 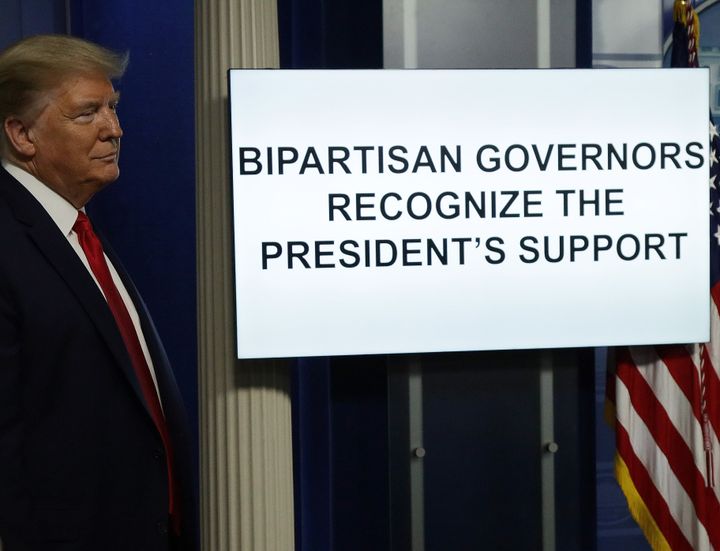 The campaign’s list fails to mention the specifics of what Trump told the press that day, which was that that the country had nothing to fear because it was all under control. “When you have 15 people, and the 15 within a couple of days is going to be down to close to zero,” he said of the known number of cases on that day, “that’s a pretty good job we’ve done.”

That comment, in fact, was similar to statements he made the entire month downplaying the threat the virus posed, comparing it to the seasonal flu and claiming it would disappear on its own as the weather warmed in April.

“We pretty much shut it down coming in from China,” he said on Feb. 2 to Fox News’ Sean Hannity.

And on Feb. 28, at a reelection rally in South Carolina, Trump told supporters that Democratic and news media concerns about the virus were “a hoax.”

“The reality is that Trump wasted February ignoring the coronavirus, downplaying the threat it posed, and taking China’s word that the virus had been contained ― even as both the intelligence community and Vice President Biden warned Trump not to buy President Xi’s spin,” said Michael Gwin, a spokesman for presumptive Democratic nominee Joe Biden.

Most of the items on her list, however, did not have to do with Trump personally, and instead were actions taken by the Centers for Disease Control and Prevention or the Food and Drug Administration to develop tests, respond to requests for cooperation from other countries and complete relatively routine tasks.

Not addressed are concerns raised in late January and early February by public health experts who worked in both Trump’s administration as well as for former President Barack Obama.

Luciana Borio, who served on Trump’s National Security Council, and Scott Gottleib, who was Trump’s first FDA commissioner, wrote in a Jan. 28 op-ed in the Wall Street Journal: “As more U.S. cases develop, the strategy needs to incorporate another goal: preventing transmission of the coronavirus within the U.S.”

Jeremy Konyndyk, who worked on the response to the 2014 Ebola outbreak under Obama, urged a “no regrets” approach in a Feb. 4 Washington Post op-ed. “A vitally important part of this will be efforts to address supply-chain ruptures and accelerate production and availability of critical medical supplies,” he wrote.

Trump’s administration, led by a president who was openly trying to avoid spooking the stock market, did few of those things experts were clamoring for. Indeed, the CDC failed to produce a reliable test for the virus until late in the month and declined to adopt a functioning German test that was available through the World Health Organization in late January.

The end result was a nation that lost two critical months to prepare for a coming pandemic — a stretch that saw Trump play golf at his Florida resort seven times and host eight campaign rallies.

“Trump did next to nothing to prepare America,” Gwin said. “And now we’re paying the price, with the U.S. leading the world in confirmed deaths and cases, and with millions of Americans losing their jobs.”