President Donald Trump used Tuesday’s White House press briefing on coronavirus to blame the World Health Organization for thousands of deaths in the pandemic while not acknowledging his administration’s faulty response in the U.S.

Trump announced that the U.S. would be halting funding to the WHO while it conducts a review of the organization’s response to the pandemic. This comes as the Trump administration has faced mounting criticism over its initial slow response to the crisis.

Attacking the WHO for “severely mismanaging and covering up the spread of coronavirus,” as well as for being “very China-centric,” Trump claimed one of the organization’s “most dangerous and costly decisions” was opposing travel restrictions from China.

Trump then credited himself with “saving untold numbers of lives,” adding without evidence that “thousands and thousands would have died” if he hadn’t restricted travel from China on Jan. 31. (The virus is believed to have originated in the country).

The WHO has faced criticism for being overly deferential to China, even as the country initially concealed news about the spread of the novel coronavirus and failed to disclose alarming data about infections among health care workers for more than a month. The group has also lagged in making some key recommendations: Its guidelines still say people don’t need to wear face masks in public unless they are sick, while the U.S. Centers for Disease Control and Prevention has recommended all Americans do so. The group waited until mid-March to declare COVID-19 a pandemic, which some experts thought came too late.

However, Trump’s ramped-up criticism of the WHO shifted blame away from his own failings just as his administration has come under increased scrutiny. A New York Times report over the weekend detailed how Trump was slow to listen to early warnings from senior aides about the urgency of the spreading virus.

The president spent late January through early March largely downplaying the threat of the virus.

As of Tuesday, the United States continues to lead countries worldwide in both confirmed coronavirus cases and deaths — with more than 600,000 reported cases and 25,000 deaths as of Tuesday. Governors spent weeks repeatedly criticizing the lack of key medical equipment, such as ventilators, and hospitals and health workers are still reporting a shortage of the personal protective equipment they need to stay safe while treating patients with the virus. 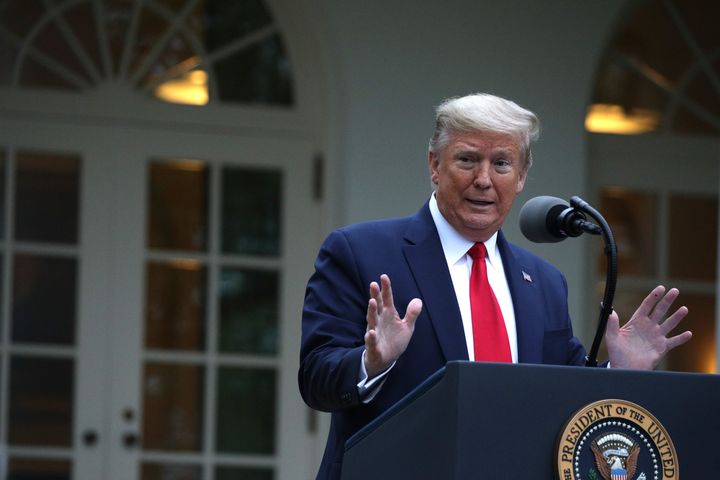 On Tuesday, Trump attacked the WHO for its delay in declaring a public health emergency, which he said “cost valuable time.” The WHO declared a global health emergency on Jan. 30.

Trump, however, has still not issued a national stay-at-home order, despite calls from public health experts to do so.

“So much death has been caused by their mistakes,” Trump said of the WHO, claiming without evidence that the group’s reliance on China’s information “likely caused a twentyfold increase in cases worldwide.” He also criticized the organization for not acknowledging its mistakes, “of which there were many,” he said.

On Tuesday, when a reporter brought up the tens of thousands of deaths in the U.S. and said people in some places say they still can’t get tested and aren’t taking social distancing seriously, Trump disparaged the reporter — as he has other reporters in previous briefings — calling him a “showboat” and “loudmouth.”

Partway through the briefing, Trump began to shift future responsibility for reopening the largely closed U.S. economy on state governors, one day after declaring he has “total” authority as president when he was asked about restarting state economies.

“The governors are responsible. They have to take charge,” he said, explaining he’d authorize each governor to implement the reopening plan for their state.

“The governors will be held accountable,” Trump said, after noting that over 20 states were in “extremely good shape” when it came to the spread of the coronavirus.

Pressed on how the president would ensure workers were not sent back to their jobs under unsafe conditions if a governor were to reopen a state’s economy too early, Trump pushed the onus back on governors, saying: “That’s going to be up to the governors. The governors are going to want to make sure everything’s safe.”