Private equity group Bain Capital will take control of Virgin Australia after creditors to the stricken airline voted to support its proposal to rebirth the carrier at a virtual meeting on Friday.

Virgin's administrators at Deloitte recommended the proposal from Bain as the best outcome for creditors who were owed $6.8 billion by the group's April collapse. Sources who attended the meeting confirm the deal was passed by creditors on the condition of anonymity. 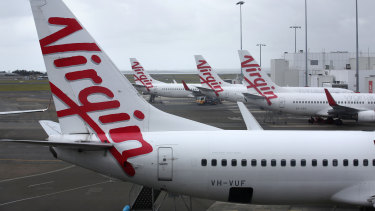 Virgin will return to the skies under its new owners, Bain Capital. Credit: James Alcock

The sale process marks the return of Australia's second carrier, which had been facing the prospect of complete shutdown and liquidation if no willing bidder was found.

Virgin Group founder Richard Branson and members of the union representing the bulk of workers at the collapsed airline, the Transport Workers Union, voted in supported the deed of company arrangement put forward by Bain at Friday's meeting. Bain's proposal also won the support from members of the Australian Federation of Air Pilots, Virgin Independent Pilots Association and the Australian Licensed Aircraft Engineers’ Association.

Bain's $3.5 billion deal to acquire Virgin will see the airline relaunched as a value carrier with limited international offerings. Virgin under Bain's ownership will also sack 3000 employees, or about a third of its workforce.

Creditors were given two choices by Deloitte at today's meeting. One was to support Bain's proposal and receive returns of as much as 100 cents in the dollar in the case of workers and ongoing government support like JobKeeper. The other choice was to vote against the proposal, which under the deal struck by Deloitte would have triggered the sale of the assets to Bain and placed the shells of Virgin into liquidation, lowering returns to creditors and the risk that government assistance may be cut off in liquidation.

The meeting comes after a tense legal standoff between Virgin's administrators at Deloitte and Virgin's bondholders who are owed nearly $2 billion and were seeking to put forward an alternative proposal to rescue the airline. That battle was won by the administrators after the court found the bond offer hopeless. Bondholders stand to receive between 13 cents and 10 cents in the dollar.