Virgin Australia’s share trading halt won’t be the usual two-day affair – it could take weeks to get a clear picture on the airline’s future sufficient to allow the company to satisfy its continuous disclosure obligations.

And that’s assuming the airline’s shares ever resume trading. Virgin needs a major financial restructuring and it is racing against time. The trading halt reinforces that sense of urgency.

A more realistic scenario is that the equity in the company is next to worthless if or when Virgin emerges from the coronavirus disaster that has decimated the aviation industry. 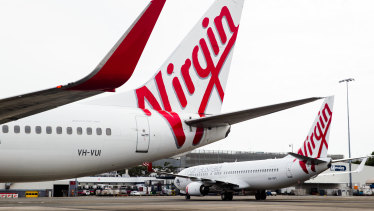 The misinformation that throwing Virgin a lifeline will line the pockets of its major shareholders, Singapore Airlines, billionaire Richard Branson, Middle Eastern airline Etihad and Chinese and Hong Kong groups HNA and Nashan is nonsense. Instead it will be owners of Virgin’s debt that will determine its destiny.

Those who took $950 million in bonds last year will also need to take a haircut of up to 50 per cent and could also end up swapping their debt for equity. Virgin has corralled debt restructuring expert, Jim McKnight from US investment bank Houlihan Lokey, for the assignment.

Virgin’s own board now has limited control of its destiny. Its ability to continue trading in the medium term is reliant on support from lenders and whether the federal government comes through with an aviation industry rescue package.

The trading halt should be a wake-up call to the government that a decision needs to be made soon. Picking winners and competitive rivalries shouldn’t enter into the government’s equation. A more strategic plan would be to ensure tourism will have support when the pandemic is over.

Qantas has a more robust balance sheet that can ride out an extended crisis but it too will be severely damaged if the grounding of its fleet lasts six months or more.

In March when Virgin grounded almost all of its fleet due to the effects of the coronavirus, the company had liquidity of about $900 million which will last for six months, according to the most optimistic estimates.

A few weeks ago Virgin approached the government for a $1.4 billion loan which could be convertible into equity and would form part of a larger industry assistance package. It didn’t fly.

The second approach from Virgin is understood to involve a $1 billion debt guarantee, which is a little less ambitious than the airline’s original request. Insiders say Virgin has received a positive hearing from some quarters including from Treasurer Josh Frydenberg, Trade Minister Simon Birmingham and Finance Minister Mathias Cormann, but has experienced resistance from Transport Minister and Deputy Prime Minister Michael McCormack.

The government has the option of letting Virgin go under but risks creating a near domestic monopoly in the domestic aviation market. Such an outcome would lead to an increase in fares both for businesses and consumers.

It could be months or years before a new full service airline emerges. While Virgin Blue (Virgin Australia’s predecessor) stepped into the breach following the 2001 collapse of Ansett, it was several years before Virgin emerged as a full-service competitor to Qantas.

It is understandable that the government doesn’t want to set a precedent by providing financial assistance for large companies lest it create a conga line. But it needs to assess whether the country’s second major airline forms part of our critical tourism infrastructure and the damage its demise would have on the thousands of smaller companies that rely on the $60 billion tourism industry.