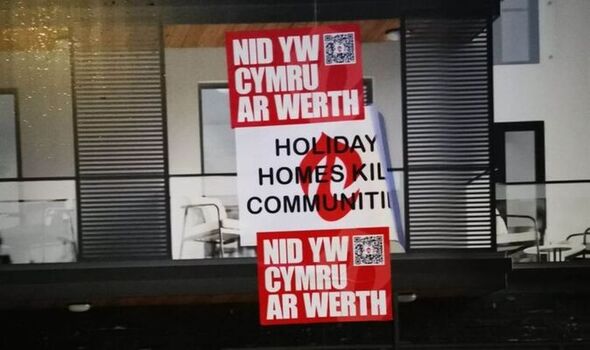 Welsh language campaigners have plastered holiday rentals with stickers after claiming the government is not doing enough to protect local communities.

Members and supporters of the Welsh Language Society (Cymdeithas yr Iaith) have targeted second homes and summer houses in Rhosneigr on Anglesey with posters declaring “Nid yw Cymru ar Werth”, which translates to “Wales is not for sale”.

The group wants the council to increase the amount of council tax paid by second home owners, which has been set at a 75 per cent premium since 2019.

But councils can charge a premium of up to 300 per cent.

In nearby Gwynedd, the council has revealed plans to increase council tax to 150 per cent. At present, second-home owners in the area pay 100 per cent extra, or double the normal council tax rate, reports Wales Online.

Speaking ahead of an Anglesey Council cabinet meeting Osian Jones, spokesman for the Nid yw Cymru ar Werth campaign, said: “The regulations and the housing situation have changed since the council made the original decision to raise a council tax premium of 75 per cent on second homes.

“2,208 houses on the island are considered second homes, which is 9 per cent of the county’s housing stock, so the council needs to use the opportunity next week to put measures in place now to reduce the problem, by raising the council tax premium for second houses.

“The Welsh Government is not doing enough either – it has been slow to give guidelines to councils about their new powers, and there is still no mention of money or resources for councils to cover the additional work.”

Earlier this year, Cymdeithas yr Iaith organised a Wales is not for sale rally outside the council offices.

The group acknowledges that second homes are only part of the problem.

The organisation is calling for a Property Act that will regulate the housing market.

Mr Jones added: “While our communities are losing housing stock and local people are having to leave their communities, neither our councils nor the Government are doing enough, or acting quickly enough.

“We will use a Nid yw Cymru ar Werth rally in Llanrwst on December 17 to call on councils across Wales to make full use of the powers they have to tackle the effect of second houses, as well as calling on them to press for a complete Property Act which will regulate the housing market.”