As Wall Street donors arrived at a fundraiser for Joe Biden at a midtown Manhattan restaurant earlier this year, campaign staff members asked if they wanted to sign up for pictures with the candidate. More than a few of the bankers and private-equity investors politely declined, opting to mingle over glasses of wine instead.

It was February 13, and Biden had just been thrashed in the New Hampshire primary after finishing poorly in the Iowa caucuses a week earlier. He was in desperate need of both momentum and money. Still, as Biden confided to the private-equity executive who co-hosted the event that night: Win or lose, he planned to "play my heart out to the very end," the executive, Jon Gray, later recalled. 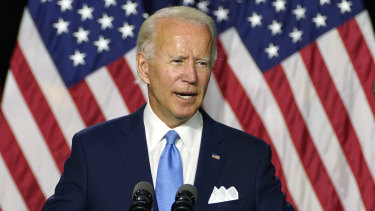 Wall Street wallets have been opening for Joe Biden. Credit:AP

And finance executives have played a critical role in helping him do it. As Biden survived a turbulent winter to become the presumptive Democratic nominee running against President Donald Trump, the millions of dollars Wall Street denizens donated to Biden and outside groups supporting his candidacy have helped him build a strong lead in national polls.

Wall Street has fared extraordinarily well under Trump: deep cuts to taxes, slashed regulations and, until the pandemic hit, record stock prices. But in recent months, dozens of bankers, traders and investors said in interviews, a sense of outrage and exhaustion over Trump's chaotic style of governance – accelerated by his poor coronavirus response – had markedly shifted the economic and political calculus in their industry.

More and more finance professionals, they say, appear to be sidelining their concerns about Biden's age – 77 – and his style. They are surprisingly unperturbed at the likelihood of his raising their taxes and stiffening oversight of their industry. In return, they welcome the more seasoned and methodical presidency they believe he could bring.

It does not hurt that Biden has also not crusaded against Wall Street, the way his primary rivals Elizabeth Warren and Bernie Sanders did.

"I've seen meaningful numbers of people put aside what would appear to be their short-term economic interest because they value being citizens in a democracy," said Seth Klarman, founder of the hedge fund Baupost.

A longtime independent, Klarman was at one point New England's biggest giver to the Republican Party. But in this cycle, he has given $US3 million ($4.2 million) to groups supporting Biden.

Or as James Attwood, a managing director at the Carlyle Group and a former investment banker at Goldman Sachs, put it, "For people who are in the business of hiring and firing CEOs, Donald Trump should have been fired a while ago." (Attwood contributed $US200,000 in June to the Biden Action Fund, a joint committee with the Democratic National Committee.)

In May and June alone, the Biden Action Fund raised more than $US11.5 million. That tally – a good measuring stick for Wall Street support because it was set up in part to draw contributions from that industry – included $US710,000 from Josh Bekenstein, a chairman of Bain Capital, and his wife. 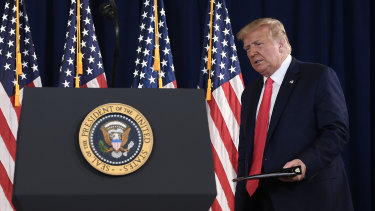 Wall Street has fared extraordinarily well under Trump but have grown weary over Trump’s chaotic style of governance.Credit:AP

As the cheques roll in, the Biden campaign has been carefully cultivating its relationship with the business community, with a focus on Wall Street. The outreach has included offering private briefings before major policy rollouts and dangling various donor packages for the upcoming, and mostly virtual, Democratic National Convention.

Nonetheless, how Biden might affect their wallets is a major concern for industry executives who aggressively fought the implementation of new regulations after the financial crisis of 2008. Some in the business community have suggested tweaks to the former vice president's tax and economic policies in ways that might soften the impact for companies.

At a July meeting with campaign staffers and a handful of Wall Street participants, Charles Phillips, chairman of the software company Infor and a onetime Morgan Stanley tech analyst, argued that Biden should not make huge expenditures on infrastructure and other new programs without also identifying spending cuts.

"We can fund some of this by getting more efficient and getting rid of waste that no one will miss," Phillips recalled saying.

He said he also argued for a simpler tax code with a corporate rate lower than Biden's proposed 28 per cent.

In recent meetings with donors, Biden has said that while the wealthy are going to have to "do more," the details of his tax hikes are still being hammered out, according to someone who has attended multiple fundraisers but requested anonymity to discuss private conversations. At a virtual fundraiser held in late July, the candidate spoke of the need for corporate America to "change its ways." But the solution, he said, would not be legislative.

Back in February, Biden had taken a precious day off the trail to collect a critical $US800,000 at two New York fundraisers, including the one Gray co-hosted.

"You're putting me in a position to be able to be very competitive," Biden said, thanking his Wall Street supporters.

A few of his finance industry donors, looking back, have privately remarked how the evening turned out to be the most quintessential of Wall Street plays: seeing a distressed asset at that time, and buying low.