Origin Energy boss Frank Calabria says the energy transition facing Australia is a staggering task that must be achieved with utmost urgency, or the challenges will only get harder and the costs greater to bear.

Calabria likened the scale of the transformation of the country’s energy sector over the next decade to a “wartime reconstruction effort” – an effort that could be stymied by consumer unrest over rising energy bills. 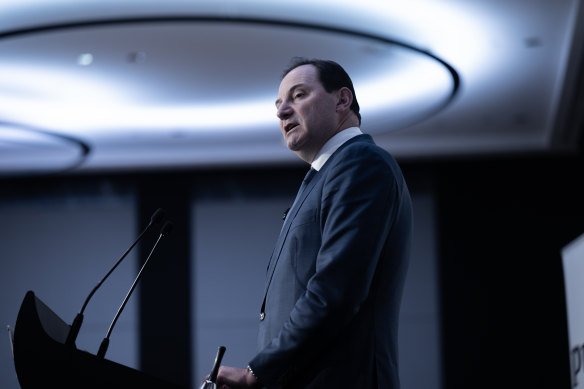 The Albanese government’s plan to reach 82 per cent renewables by 2030 requires at least $76 billion of investment to create 44 gigawatts of renewables, 10,000 kilometres of new transmission lines and up to five million electric cars on the country’s roads.

“It is a truly staggering task to achieve those 2030 targets, and we must act with more urgency, as each month that passes makes the challenge harder with the propensity for adding costs,” Calabria said in a speech on Tuesday at a Committee for Economic Development of Australia event in Sydney.

Australia’s shift to cleaner energy is well underway. Renewables account for about 30 per cent of electricity supplied to the National Electricity Market and more than three million homes have rooftop solar.

‘We simply can’t afford to lose community support, or we risk derailing the transition.’

But Calabria said delivering the energy transition, given the scale of investment required, will undoubtedly result in a lift to energy bills – at a time when households are already struggling with the rising cost of living as the war in Ukraine puts unprecedented pressure on global energy supplies, sends commodity prices soaring and, along with pandemic-related inflation, rapidly translates to higher consumer prices.

“I fear rising energy prices could erode community support for the transition – a task that can only be delivered with coordination and commitment across governments, the private sector, market operators, regulators and communities,” he said.

“I’ve often talked about what customers stand to gain from a future energy system … but right now, those benefits feel out of reach and out of step with what many customers are experiencing today.”

Energy providers must be honest about the cost to households’ to reduce “bill shock,” he said. “I fundamentally believe this is one of our biggest risks, and we simply can’t afford to lose community support, or we risk derailing the transition.”

Calabria identified six of the biggest challenges to unlocking the benefits of the transition.

They include maintaining the reliability of the existing power system (including coal), building replacements with greater urgency, managing costs of big projects like Snowy Hydro 2.0, becoming cleverer at manipulating the demand side to ease energy peaks, sharing the huge costs involved with customers, and supporting the continuing role of gas in the generation system.

Origin’s chief executive and the company’s board are in the throes of deciding on a potential buyout after the company received an $18 billion offer from a consortium led by Canadian asset management firm Brookfield.

ASX-listed Origin, one of the nation’s largest power and gas suppliers, told investors a week ago it will open its books to the consortium of Brookfield and energy infrastructure investment giant EIG, and intended to recommend shareholders approve the $9-a-share cash offer, which represented nearly a 55 per cent premium to the stock’s last closing price.