Richard White's position as founder of the global logistics software maker WiseTech Global, gives him a unique insight into why he is having trouble indulging his hobby and former profession as a musician.

There is a three month wait for the Roland musical equipment he wants and Fender Guitars has reported double-digit sales growth for the first time in decades. 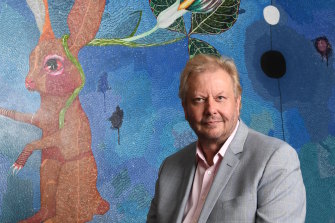 WiseTech chief executive Richard White says many of the things we thought were immutable and unchanging before the lockdowns actually had to change quickly or became easier to change. Credit:Peter Braig

For White, it means that people waiting for a return to normal with COVID-19 vaccines on the horizon may be in for a shock.

"We are not going to get back to doing the things we used to do," says White who expects the goods-led economic recovery to continue at the expense of things like corporate and holiday travel.

"I think corporate travel will be a very different thing in the future, I think people will think twice about going overseas for at least a few years, and people will realise that they've been able to have their enjoyment in their homes."

This is reflected in the continuing demand for goods like home gym equipment and the fact that WiseTech, a $9 billion company, is seeing sustained trade growth for its major freight forwarding customers like DHL and Aramex.

According to WiseTech, which offers logistics companies a cloud-based platform to manage all of their operations, shipment volumes for the December quarter are tracking above last year's highs.

"Everybody across the physical goods supply chain is seeing it's a goods-led economic recovery … people have decided that various social activities are no longer viable," White says.

The rising trade volumes have been a factor in helping WiseTech sign up six new global customers in 2020. In a normal year the company would sign two and White says the sales outlook for the new year is also encouraging. However, he adds that it will be a while before the financial benefits of the new customer wins flow into WiseTech's books.

"That's a long term play, those things won't hit the revenue line particularly this year, they will start to come on next year and the year after," he says.

Playing a long game has been a defining feature of White's leadership at WiseTech, which started life in 1994 but waited until 2016 to land on the ASX. It's approach to growth, through buying a host of global peers, has drawn criticism from some quarters.

WiseTech was hammered in 2019 over its acquisition spree in a short seller report by Beijing-based J Capital that sent WiseTech’s share price plunging. It has since sporadically come under fire from short sellers but analysts are broadly willing to give WiseTech a chance to deliver on its promises.

Citi's Siraj Ahmed says the company is "transitioning from being acquisition driven to being organic driven, which we see as a positive."

He also points to the stronger than expected recovery in shipping volumes, and customer rollouts as the big drivers , which have led to Citi upgrading its price target on WiseTech by 25 per cent to $27.70. However, Citi has maintained its Sell recommendation given the share price has stayed above $30 and lingering concerns about WiseTech's ability to digest more than $400 million worth of acquisitions.

"With the stock trading at 20x FY21e revenue, we think that the market could be underestimating the risk that the conversion and integration of WiseTech's acquisitions into the core Cargowise platform could take longer than expected and not deliver expected returns," says Ahmed. 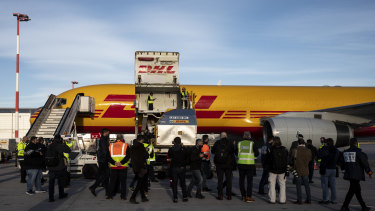 But the integration of acquisitions isn't the only thing on WiseTech's agenda, with a new product, Cargowise Neo, shaping up to play an important role for the company in the new year.

It is a web portal that will extend Wisetech's footprint in the logistics market, connecting it with companies like Kogan, Bunnings or Woolworths that may deal with freight forwarders but might also do the logistics work themselves. It is a segment of the market that's not covered by WiseTech's flagship product Cargowise One.

In Citi's words, Neo should help WiseTech's edge closer to fulfilling its vision of being the operating system for the logistics ecosystem represents "a step change in revenue potential for WiseTech and represents a key upside risk to our medium-term growth forecasts."

Meanwhile, COVID is far from the only structural issue on White's radar, as trade tensions between China and number of western countries continue to cast a shadow over the global economy.

White says China's importance to global trade is likely to remain undiminished despite political sabre-rattling. According to White, removing China as the centre of the world's manufacturing supply chains will take years, given its role as the top producer of goods and services for as many as 120 countries.

"It's got very strong manufacturing capabilities, a well-educated workforce, available labour, and very strong logistics chains that lead into the inner parts of the country.

"So you can get things from the manufacturing (bases) all across the country to the major ports and airports and that is continuing to flow," he says.