WASHINGTON ― Whether you live or die because of this pandemic could very well depend on how afraid your governor is of President Donald Trump.

Across the country, how readily the coronavirus is spreading in your state roughly correlates with how early your governor issued a stay-at-home order – which in turn tracks how willing your governor was to buck Trump’s attempts to downplay the outbreak.

And that correlation is showing a strong partisan break, with Democratic governors typically taking action days or weeks before their Republican counterparts. Of the eight states that still do not have stay-at-home orders, all are led by Republicans.

“One explanation is that they fear the Trump base. Another possibility is that they are the Trump base,” said Mac Stipanovich, who served as chief of staff to Republican Florida Gov. Bob Martinez in the late 1980s but who has become increasingly critical of his party under Trump. “It may be the case they are as dumb as they appear to be.” 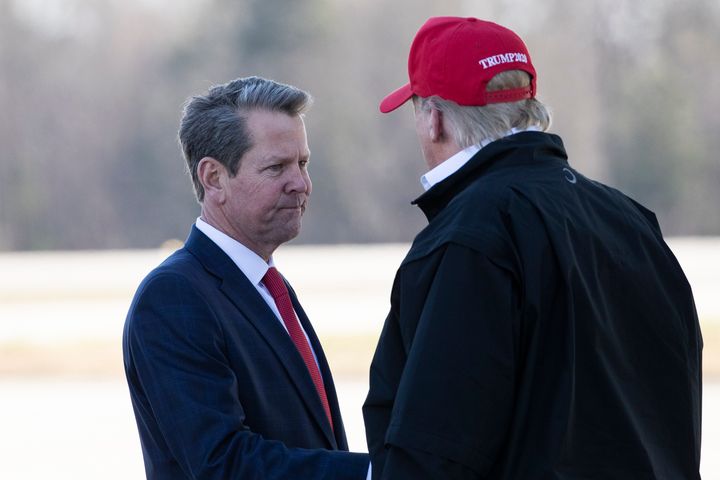 There are notable exceptions to the Democratic-Republican split. The Democratic governor of Maine, Janet Mills, did not issue a stay-at-home order until April 2, although she had ordered the closure of all nonessential businesses nine days earlier. And Republican Brad Little in Idaho declared an “extreme emergency” with an accompanying stay-at-home order on March 25.

But in general, the governors who acted promptly are in solidly Democratic states, where they are less affected by Trump’s attacks, or in “purple” states with Republican governors who must be responsive to a broad electorate.

California, Oregon and Washington were among the first states to issue stay-at-home orders, and, as a result, slowed the spread of the virus and COVID-19, the disease it causes, to a manageable level. California’s order came March 19, the first in the country, while the other two states followed four days later. All three have Democratic governors, and California Gov. Gavin Newsom announced Wednesday that hospitals in the state would be able to resume elective surgeries.

Meanwhile, a number of Republican governors who have aligned themselves with Trump bought into his false claims that the virus was not as serious as the seasonal flu and would go away on its own come spring.

Alabama Gov. Kay Ivey proclaimed on March 27: “Y’all, we are not Louisiana. Right now is not the time to order people to shelter in place.” She signed a stay-at-home order a week later, on April 3.

And while South Dakota’s Kristi Noem has ordered schools closed and has told the elderly and other at-risk groups to remain home, she has refused to issue a general shelter-in-place order, even though the state is home to a Sioux Falls meatpacking plant that hosted a COVID-19 cluster with hundreds of cases.

“Many Republicans seemingly can’t go to the bathroom without being given the implicit OK by the president,” said David Turner with the Democratic Governors Association. “Democrats are making decisions based on science, facts, and the advice of medical experts. I think that’s the reason Americans continue to put more faith in their Democratic governor to make the right decision than the president’s daily, ad hoc advice.”

Not all GOP governors, though, were waiting on permission from Trump, who from Jan. 22 through March 15 downplayed the lethality and extent of the virus, even calling concerns about it a “hoax” at a Feb. 28 rally.

Ohio Gov. Mike DeWine issued a stay-at-home order on March 23, becoming the first GOP governor in the country to do so, followed four days later by New Hampshire’s Chris Sununu. Both won in 2018 despite a wave election that saw Democrats pick up hundreds of legislative seats, seven governors mansions, and control of the U.S. House of Representatives.

On Wednesday evening, DeWine posted a series of statements on Twitter criticizing protests against the lockdown that compared it to Nazi Germany, ending with the declaration: “Ultimately, I am responsible for the decisions in regard to the coronavirus. The buck stops with me” – a stunning contrast with Trump’s statement on March 13 that he didn’t “take responsibility at all” for the country’s coronavirus response.

DeWine has a decades-old reputation in Ohio that has nothing to do with Trump, said Kyle Kondik of the University of Virginia’s Center for Politics. “I think he’s more free to do what he thinks is right,” Kondik said, but added that DeWine has avoided antagonizing Trump and thereby endangering the delivery of federal assistance. “He’s really done a good job of threading the needle.”

Sununu, in New Hampshire, has also taken action that diverged from Trump’s message, said Fergus Cullen, a former GOP state chairman and a frequent Trump critic. “I think his tone has been really measured. He’s avoided controversy on it. He hasn’t gotten baited on it,” Cullen said, referring to a small protest at the state Capitol against the lockdown that Sununu chose not to comment on at all.

Sununu’s actions are in marked contrast to those a thousand miles to the south in Trump’s new home state, where Florida Gov. Ron DeSantis may have made himself the most notorious Republican chief executive of them all by failing to take any statewide action during the heart of spring break, with thousands of college students gathering in South Florida and many of them taking the virus back to their hometowns all across America. 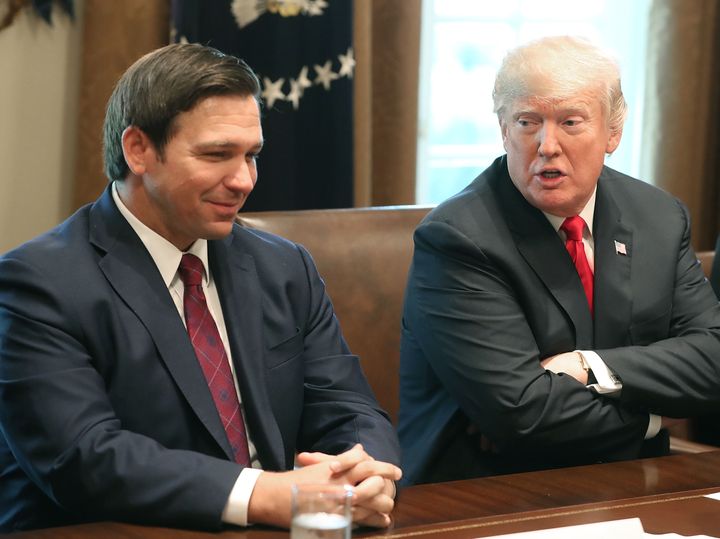 DeSantis, who won the GOP primary almost entirely on the basis of Trump’s endorsement, had nevertheless spent his first year in office governing as a relatively mainstream Republican — until the coronavirus pandemic. He refused to issue a stay-at-home order until April 1, by which time the number of COVID-19 cases was already soaring, and then ordered a million doses of the anti-malaria drug Trump had been touting despite the lack of scientific evidence that it would work.

DeSantis’ office did not respond to HuffPost’s request for comment.

Gwen Graham, a Democrat who also ran for governor in 2018 and who previously served with DeSantis in Congress, said his handling of the crisis undid any independence from Trump he had achieved in his first year.

“It’s been a disaster. DeSantis is doing what Trump tells him to do,” she said. “He’s there because of Donald Trump, and he returned to the mothership when things got the toughest.”

Of course, a warning for DeSantis and others hoping to stay in Trump’s good graces may well have been issued this week to Florida’s neighbor to the north.

Georgia Gov. Brian Kemp (R) was among the first in the country to follow Trump’s suggestions for “re-restarting” the economy by allowing businesses to reopen on Friday, including establishments like nail salons and tattoo parlors.

But rather than back Kemp, Trump said on Thursday that as much as he wants to get the economy going again, he personally could not support Kemp’s actions.

“I wasn’t happy with Brian Kemp. I will tell you that right now.” Trump said. “But I said you’re making your own decision.”